The SupportDesk Licence manager makes use of the information collected by the Audit process. It allows users to build up a set of records that provide information on the number of discovered software packages, and compares this with the entered number of valid licences.

A traffic light colour coding indicates the compliance discovered by SupportDesk. Red in the case where there are more licences than declared. Green for compliance with licences to spare, and Yellow for exact compliance.

The Licence Manager is accessed by navigating to Your Company > Licences: 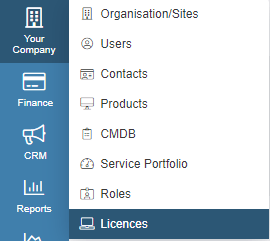 ” which opens the screen below: 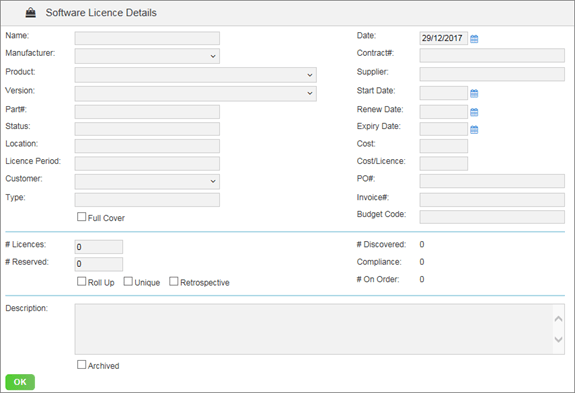 Although there are many data fields available, a new Licence record can be created with very little data. In the case of a simple Licence record for one version of software, the user only needs to give the Licence a meaningful name, then select the Manufacturer, Product and Version from the options available.

The data shown in these dropdowns is from that discovered and loaded into SupportDesk from audited machines. The screen will automatically show the number of “Discovered” licences of the specified software, and the actual PC that the software is on can be seen using the “Discovered CIs” Tab.

By entering the number of licences that your company actually has in the Licence Record SupportDesk will then indicate compliance or otherwise.

To create a licence that encompasses multiple versions of a software product, it is possible to maintain a “Parent” Licence record, which then has many “Child” licences associated. This is done by using the “Add Sub-Licence” option at the bottom of the Licence dialog screen. Multiple Child licences can be produced with the net number of discovered CI’s shown on the parent screen. To accommodate the eventuality of CIs having multiple versions users should select the “Unique” option on the Licence screen which will then simply show the number of unique CI’s with the software.

QuickReports can be used to create a bespoke report on the Licence compliance – as shown below. 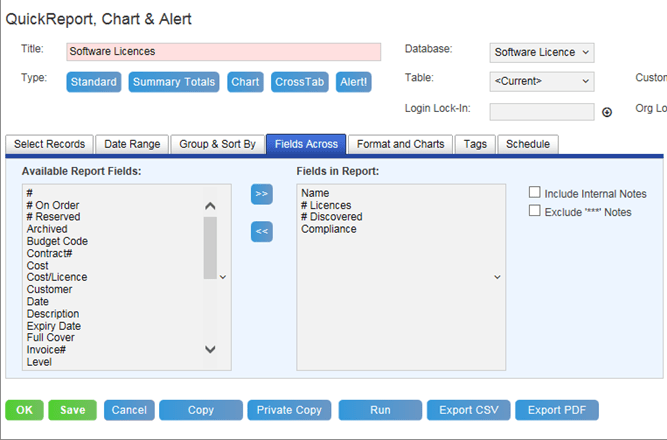 Which will generate report in the style shown below:

Reports can also be generated against the individual software records that have been captured by the audit process. In this case, the Database to be specified in the QuickReport Designer would be Lic.Software and typical fields as shown below. 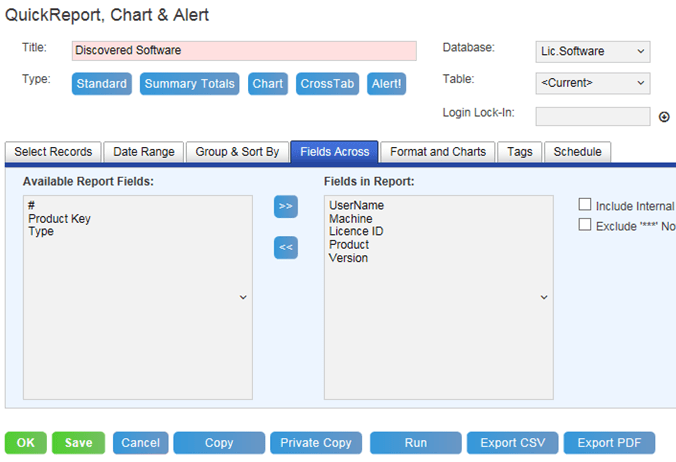 Using the “Search For” option in Quick Reports it is also easy to filter the report to just the Software of interest.  Thus, using the parameters shown here, we have specified to Search for “Microsoft Office Project Professional 2010”

This provides a report similar to that shown below.

As well as automatically importing audit files, the SupportDesk Workflow Engine can also be configured to check compliance. If any failures are detected an email will be sent to the email address on the Company configuration screen.